Night of the Comet was available on DVD as far back as October 2004 as part of a Japanese 5-disc box set. Yesasia.com lists it as being part of Fantasuthikkubokkusu (translates as Fantasic Box Set). Being Japanese, it’s Region 2, NTSC.

Korean VHS Release (with thanks to @yokai_meat for the images)

Night of the Comet was also available in CED (Capacitance Electronic Discs) format as an RCA Selectavision VideoDisc. CED was a consumer video format on grooved vinyl discs that was marketed by RCA in the 1980s. Catalogue # 24543674399.

The artwork on the back of the disc, in addition to the synopsis of the film, also contains the following info about the film from an uncredited source:

The most often heard question concerning Night of the Comet asks how it’s possible to get those eerie shots of LA without people, cars and airplanes. It is easy. In fact, no tricky optical effects such as painted backdrops or airbrushing were used. Mosrt scenes were shot during the middle of a normal business day.

Many camera positions were set on natural rises. So we see only a short distance before the ground slopes down and out of view, thus hiding all the traffic. For some shots, the actors and crew simply waited for natural breaks in the traffic. And, of course, pointing the camera up at buildings during shooting eliminates traffic problems altogether. That’s all there is to it. Coupled with the right wind sound effects and dialogue replacements flavors the shots of LA with a sense of desertion.

Unofficial Spanish VCD cover – front and back cover with spines

Night of the Comet wasn’t officially released on DVD until March 2007, as a result, to meet fan demand there were a number of Bootleg DVDs in circulation. 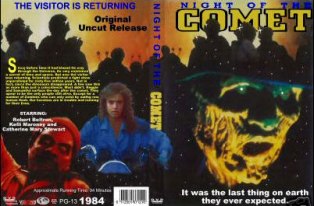 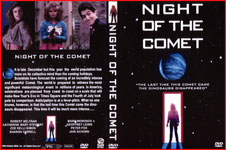 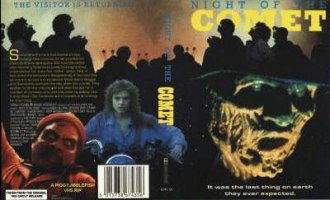 The Night of the Comet Blog is a non-profit fan site with the purpose of archiving information regarding the 1984 film Night of the Comet which was distributed by Metro-Goldwyn-Mayer Studios Inc. All Rights Reserved. This site features several images from the film which are used for Editorial Purposes under the Fair Use Doctrine in the US (nonprofit educational purposes) and Fair Dealing Doctrine in the UK (Fair dealing with a work with acknowledgement for the purposes of criticism or review or, unless the work is a photograph, for the purposes of news reporting (s. 30)). All images have been credited where possible.